Just the name of the state, Hawaii, invokes visions of breathtaking beaches, spectacular surfing, and lively luaus. The Aloha State is a peaceful paradise that draws literally millions of visitors each year. Did you know Hawaii is actually over 100 islands? There are six main islands that each have their own distinct and unique character that we are going to talk about here. Whether it’s for a relaxing, quiet vacation or one filled with tons of activities, Hawaii has got you covered!

Hawai’i, called the Big Island because it is twice as large as all the other islands put together, offers tourists hundreds of miles of coastline for swimming, snorkeling, and surfing. Covering 4,038 square miles it has diverse terrain including pristine beaches and lush rainforests.

The most popular tourist attraction is Volcanoes National Park which offers guests the opportunity to hike over solidified volcanoes. Currently, there are no active lava flows, but you are still able to see where the lava last flowed in 2018. While on the Big Island, don’t forget to see a Luau Show and experience the local food and culture.

Kauai, the oldest of the islands, is known as the wettest place on earth because it gets an amazing 460 inches of rain per year! That’s probably why it is like being in a huge garden of flowers and tropical vegetation. You also may recognize it from the movies. Jurassic Park and Raiders of the Lost Ark are just two that were made here.

You can see a lot of it on the Kalalau Trail which is 11 miles long and leads from Ke’e Beach to Kalalau Beach. If you don’t plan to do the whole hike, which is a bit strenuous, at least hike the first two miles as those are the most scenic. If you’re not up for a hike at all, this is the best place to take a helicopter tour.  See all the lush vegetation and sweeping beaches from a bird’s-eye view.

Don’t miss the opportunity to snorkel with sea turtles at Tunnels Beach. Its name comes from the lava tubes that are underwater that create tunnels and caves, which are home to the most colorful sea life creatures you will find. The farther out you go, the more sea life you will encounter. Maybe you’ll get lucky and a sea turtle will come up top and swim alongside you!

Just a 45-minute trip by ferry is the island of Lanai. Although it is the smallest of the six main islands, it is the largest private island in the world, and luckily, unlike other private islands, guests are free to visit at any time! Also known as the Pineapple Island it was home to the Dole pineapple plantation until 1992. If you’re looking for a laid back, quiet respite, this is the island for you.

While relaxing, take a trip to the barren site of The Garden of the Gods. What at first glance might seem like only boulders and dust, you can easily get caught up in the history here. First, if you’ve ever been curious about what life on Mars would resemble, this is it! You can only tour the 140 square miles by 4 wheel drive vehicle or mountain bike, but you’ll see towers, spires, and formations throughout what is called a volcanic rock garden. According to a Hawaiian legend,  the dry landscape in this area is a result of a challenge between two priests.

The island of Maui often comes out on top of the “best island” in the world poll (although we think they’re all the best.) It has the most swimmable miles of beaches and is a top destination wedding and honeymoon spot. Take a scenic drive along the Haleakalā Highway which covers 10.67 miles of the Haleakalā National Park. The highway starts at the entrance of the National Park and leads to the summit of Haleakalā with views of the island’s endless beaches.

It is also the breeding grounds for the Humpback Whale, so it’s a great place to do some whale watching. And don’t forget to visit Lahaina Town which is known for not only it’s great shopping, activities, and restaurants, but the great Banyan tree located in the town square said to be the largest tree in the world.

Hop on a short plane ride to reach the island of Moloka’i and its famous white sand beaches. Also known as the Friendly Island, it is said to be the most Hawaiian because 40% of its inhabitants are of Hawaiian descent.

It is also the least developed as well as the least touristy island, but it’s a great way to get a feel for what the islands were like back before they grew to the hotspots they are today. No building can be built taller than a palm tree, and since there are so few cars there is no need for streetlights. This is a great island to relax on and unwind from all your other adventures while in on the islands.

Last but not least, you’ll find the world-famous Waikiki Beach (along with 125 other beaches) on the island of O’ahu.  If you are looking for the chance to experience spectacular sunrise and/or sunset head over to Lanikai, one of the prettiest areas in O’ahu and hike the Lanikai Pillbox Trail (don’t worry, it’s one of the easier trails) and watch the sunrise over the amazing crystal clear water. For sunset, you can take a Sunset Cocktail Cruise from Waikiki, what better way to take in the view than on the water on a cruise!

Most visitors to Hawaii arrive in the state’s capital, Honolulu, located on O’ahu. The island has many cultural and historical sites to visit, but none is more moving than the USS Arizona Memorial at Pearl Harbor which honors the 1,177 US sailors and Marines who died in a surprise attack on December 7, 1941, and commemorates the events of that sad day in American history.

We hope you enjoyed learning a little about the beautiful state of Hawaii. This is one trip you won’t want to forget, so make sure your camera is well charged and you have tons of space for pictures! Don’t forget to pick your favorites and have them framed so you can enjoy the memories of this trip for years to come.

A State By State Guide For Your Travel Photography: Alabama 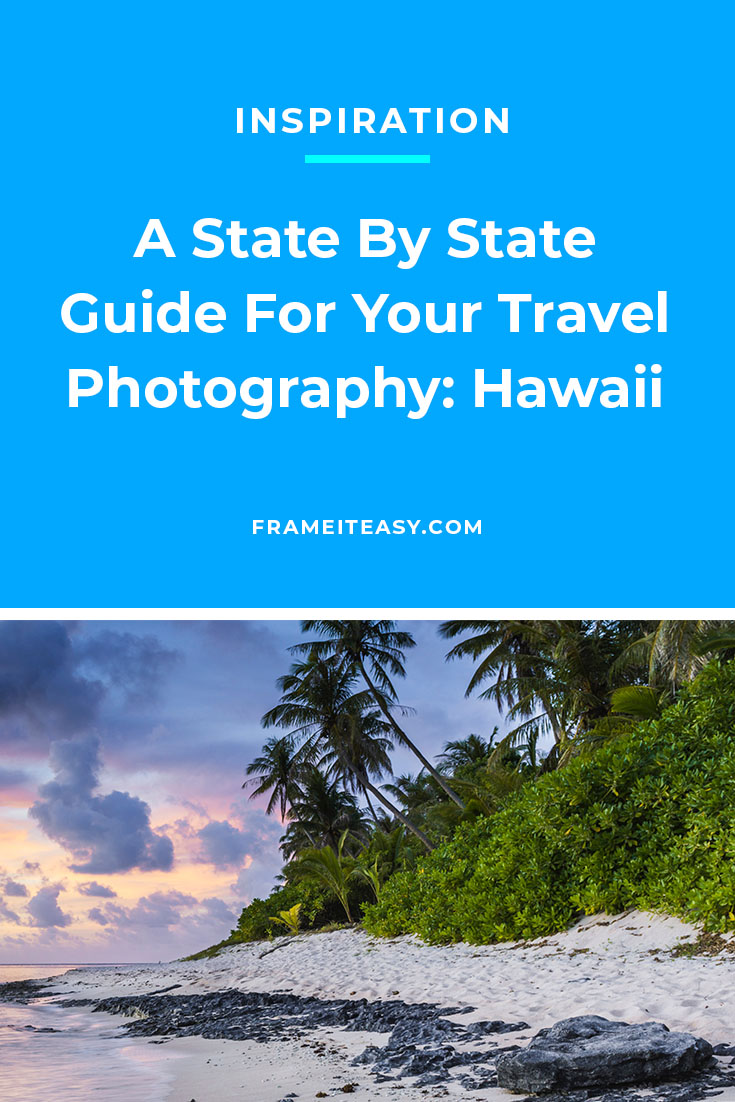