Concept art is the beginning of everything movie, show, and video game-related. Everyone knows Darth Vader, right? Well, if it weren’t for Ralph McQuarrie, the famous — or infamous, depending on who you talk to — movie baddie would still be just an idea in George Lucas’s head, never to make it to the big screen.

Concept art is exactly what it sounds like. The concept — or idea — that lays the foundation of your design to capture the visual feel for your plan, before it is put into final production. Concept art is a simple, yet specific drawing to visualize the idea. While of course, the art gets changed around a bit before being put into production, it is still neat to see where the idea originated from, and see its creative process from the very beginning.

While concept art might not be your first choice when it comes to framing, it could be a really cool gift for any movie lover or video game fanatic. Here are a few reasons why concept art makes a pretty great framing project!

If You’re An Artist, It’s A Great Way To Display Your Art

Of course, when you’re an artist, you work very hard from start to finish on your art, and while its great to display your finished piece, don’t forget where it all started.

As an artist, you must first put your ideas on paper, which isn’t always an easy task. When you come up with a great idea, it is rare to able to draw it out perfectly on your first try. And if you can, great! But most of the time, many sketches are needed until you finally get it, well, right.

That said, wouldn’t it be cool to save your progress along the way and frame a piece of that? It will not only display your progress, but you can look back on how a simple idea, turned into a beautiful masterpiece.

It’s How Every Creative Project Gets Started

You have a favorite movie? Comic book? Video game? Cartoon show? Well, it all started with concept art.

Everyone likes to know the origin of their favorite characters — both narratively and, in terms of concept art, conceptually. It lets you see the building blocks of something — the foundation of a house, so to speak.

It would be really cool if you bought a piece of concept art, and framed it next to the final poster of a movie. It would sort of be a preliminary stage piece of art that’s framed next to its final form.

It’s One Of A Kind

Everyone knows movie posters. Most of them are mass printed, and you could pick one up at a store in the mall — or, if you’re with the 21st century, online.

Concept art, though, isn’t always reproduced. It’s usually one of a kind. Of course, some concept art has become famous and has since been mass printed — Ralph McQuarrie’s Star Wars art being the most prime example of this.

But that is an exception — not the rule. Most concept art gets lost in the behind the scenes footage, which is in the special features of blu-rays and DVDs that aren’t always watched.

This doesn’t have to be the case, though. You can turn your home into your own little production history museum with a few cool pieces of concept art. It would even give you something to talk about with guests, and give you a little bit of fandom points.

It Shows How Big Of A Fan You Are

Of course, framing a movie poster is great, but what if you were able to get your hands on the drawing that started it all? Something that is rare to have, but represents something much bigger than what it actually shows!

Artists may have tremendous talent. But at the end of the day, they’re just people like everyone else. Often times, they get booths at comic conventions, which might be a good spot to pick up some of their concept art, by the way!

Artists love it when fans are interested in their work. And after a few times of buying their concept art, they might start to recognize you. New friends. Great art. All the more reason for you to buy and frame it.

It Often Has An Aesthetically Unpolished Look

Sure, the finished, professional look is sometimes what you want to go for. It certainly is what we strive for with our frames.

But the bare-bones, even sketch-based vibe is something that some people look for in art. Concept art definitely has this. It’s preliminary. It often doesn’t get touched up, and it just shows the inner workings of one person’s mind.

If you’ve been to our Learning Center before, you know we are constantly sharing new inspiration for your framing projects. You have a ton of options with framing. In fact, your options are practically limitless.

When it comes to decorating styles, everyone is different. Of course, when it comes to home decor, do what makes you happy and what you think will look best! If movies, television shows, video games and even books are some of your interests, take a look at finding some concept art to make your next framing project!

If you do happen to frame some concept art, be sure to share your photos with us, we would love to see what you designed!

10 Ways To Stay Productive While Bored At Home 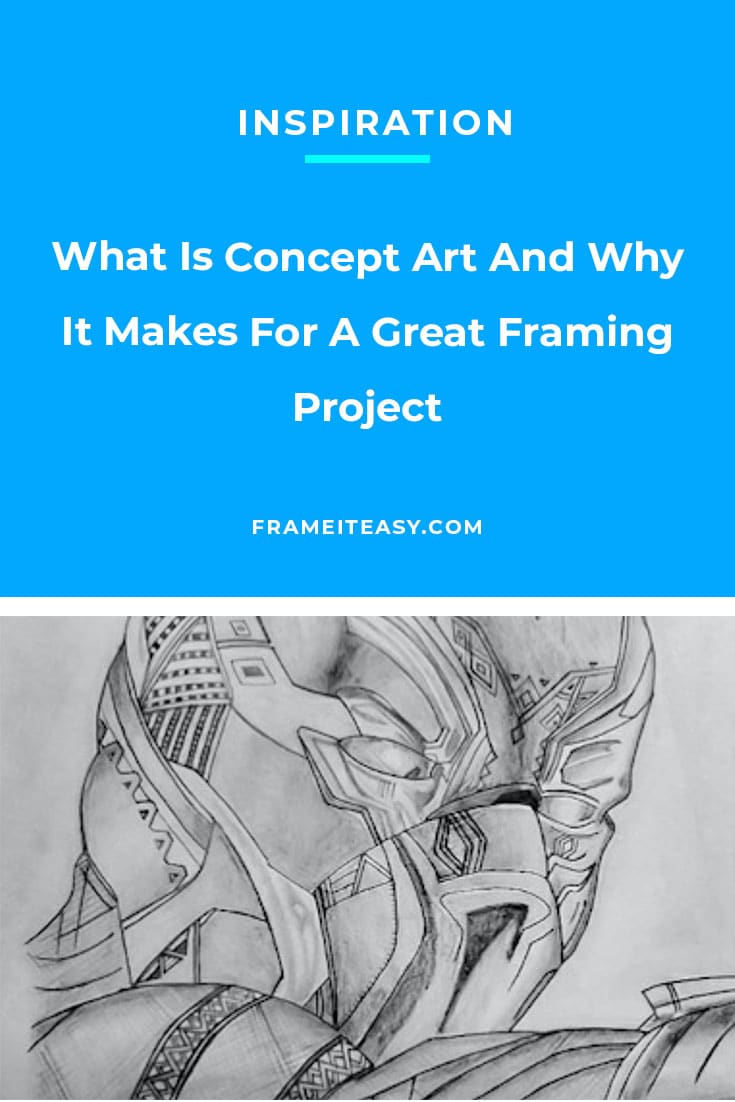