You know what they say: “Third time’s a charm.” Indeed, there is something that just feels even about the number three, even though it’s an odd number! Still, the number three still just sort of permeates everyday life. In photos and art, there’s the rule of thirds. If you’re a parent, you’ve probably given your children to the count of three at least once in an instance of misbehavior! Movies always seem to work best in trilogies, just ask George Lucas. And sometimes, so do pictures.

We’re not talking about a series of three pictures, though- all separate in nature. We’re talking about one picture or photo, divided into three portions, hung next to one another to form a unified display. This is called a triptych. The term itself comes from the Greek word meaning “three-fold.” So it’s an appropriate title given their nature as a collective piece. Sometimes a piece of art is just too enticing to keep confined to one picture frame. You need to spread out all the details for a more sprawling display! We get it, too. Go as crazy as you want with your home decor. It’s your project. You should be happy with it.

But what are the best ways to display a triptych? Are there any details or ideas you should take into consideration? Let’s get into all that right now. Hopefully, after reading this, you’ll have a better idea as to how to tackle this project.

Where Can Examples Be Seen?

You’ll be able to find most examples of triptychs in old religious art. In this case, they were used to depict images of the holy trinity and could be easily folded and transported in between churches. Now, of course, they don’t necessarily have to denote religious content. They’re just a series of three images meant to make up one greater picture.

However, you can see in early examples that the middle image was usually the largest one, with more narrow side panels making up the ends.

Hieronymous Bosch, a painter from the 15th century is a good example of a prolific triptych artist. Other examples from this time, however, can be seen as well. You can also see a somewhat modern revival of triptychs in pop art. One of Andy Warhol’s most famous pieces was the “Marilyn Monroe Diptych”- think a triptych, but with two arts instead of three- and you can see pieces like that across the internet. Zellart, in particular, has some really cool pop art triptychs, just in case you’re in the mood for such a piece.

You’ll find options on other sites, too, such as Etsy. So if you want your fix of modern three paneled art, you’ll have no shortage of choices.

Of course, you are not limited to only art. Word art can also be used for this. As we always say — do whatever you think will look good, after all, it is your space. So get creative!

What Type of Frame To Use?

This is sort of a pervasive question for every project. If you don’t know what type of frame to use, it’s going to be difficult to get your project off the ground. That’s why we’re here, though! So, for this type of project, you probably want as little frame rail between each piece as possible. This means you’ll want something with thinner frame rails. If you’re buying from us, the best choice would be our Ashford or Hanover frame styles. They are each 3/8″ thick when looking at them from straight ahead. This is the thinnest style we have available.

This makes it easier to make all the photos gel together. Of course, if you want a thicker frame style, go ahead and select one! It’s your project, so do with it as you see fit. That said, if you want each individual portion to look as gelled together as possible, the thinner frame style would be the way to go.

Our Ashford and Hanover are also metal frames, which can accommodate thicker art- 1/4″ in-depth, to be precise. This will make them more likely to accommodate your triptych, which may or may not be on a thicker canvas. If it’s beyond 1/4″ thick, though, you would likely need to look to different sources for framing; we can’t accommodate art past 1/4″ in depth. Just something to keep in mind, as we want your art to look its best, whether it’s in a frame from us or not.

If an image is great, why not expand it across three different frames?! Triptychs can be a cool way to make a sprawling image take up more than just one frame and more space on your wall. They’ve been around a while, but have taken on more modern content since their inception half a millennium ago. Just remember the following when framing them, and you shouldn’t lose your way:

Of course, if you need any help along the way, reach out to our support team who is always around to help.

Have a triptych you’ve already framed with us? Share it with us on social media! We would love to see it. 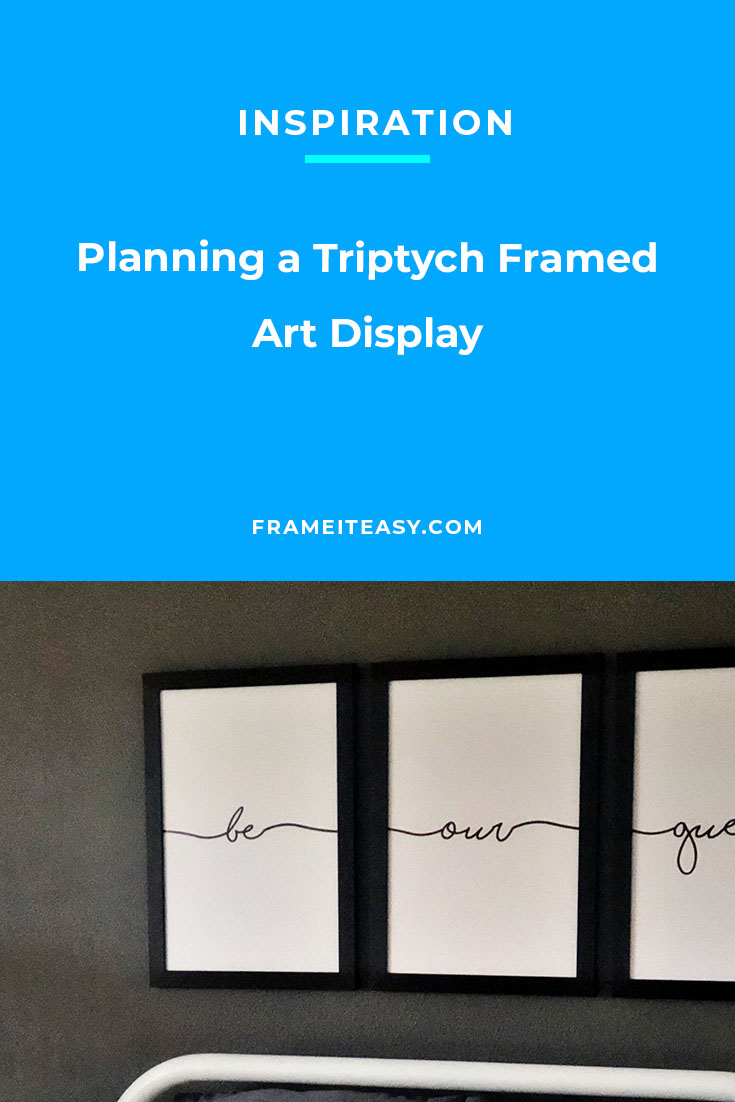